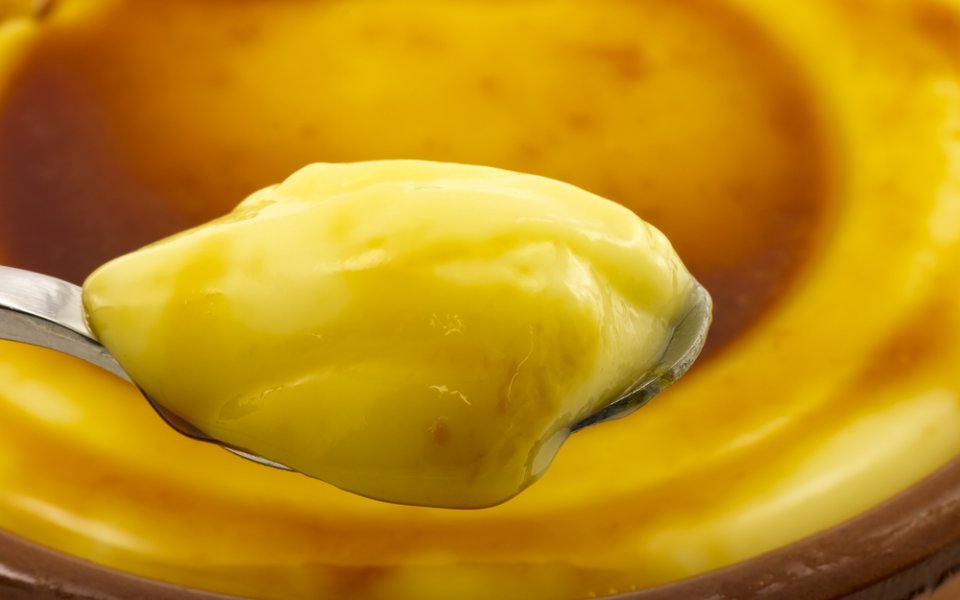 Custards contain cream or milk, or a combination of the two, sugar and a coagulant, such as eggs, starch or gelatin.

2. Custards cooked in a pan (with egg yolk), such as crème anglaise (used as a sauce for desserts and as a base for ice cream)

3. Custards cooked in a pan (with egg yolk and starch), such as pastry cream.

In oven-cooked custards (category 1) the thickening of the cream is caused by the complete cooking of the proteins in the egg yolk by the increase of temperature. This factor, combined with the milk and cream mixture’s fat content and yolk ratio, are the defining factors for the custard’s final texture.

Respectively, in custards cooked in a pan (category 2), the thickening is far less than in the previous case and is achieved by the partial cooking of the proteins in the egg yolk thanks to the constant stirring and its reduced exposure to high temperatures.

In the third case, the use of starch as an additional coagulant produces a relatively thick mixture that is suitable for numerous preparations, such as tart fillings, pastries and sweet cakes, as an ingredient in various mousses, etc.

The uncooked category and pannacotta especially, has become particularly popular in recent years. Its name literary means cooked cream although, as we have already mentioned, this is not the case. An explanation for this is that in the beginning, the North Italian confectioners prepared the sweet using the cooked method but later modified their methods thanks to the spread of the use of gelatin and refrigeration. In essence, the cream and sugar mixture is heated so that the sugar melts and, if various flavors are being used, for them to infuse their aromas into the mixture. The process is much simpler in relation to the cooked custards because the coagulant is nothing more than gelatin. Again, the mixture’s fat content defines the flavor and texture while the quantity of gelatin also influences the texture.